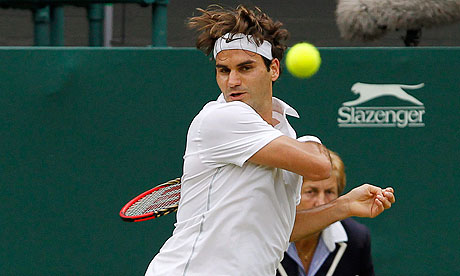 With this victory, Roger Federer has become the first man to reach eight Wimbledon finals. The six-time champion triumphed in two hours and 19 minutes of hard work against the younger world number one.

Commenting to BBC on the victory, Federa says, “I’m obviously ecstatic, I’m so happy… I played a great match. It’s been a tough tournament for me but I was able to play some fantastic tennis today. I thought Novak also played well. The first two sets went by so quickly but then I was able to step it up a bit. Maybe I got a bit lucky because he also had break points in the third set but it feels great to be in the Wimbledon final.”

Federer will be playing the winner of the semi final match between Andy Murray and Jo-Wilfred Tsonga in the finals which comes up on Sunday, 8th July, 2012. If Federer wins this final, he would have equaled Pete Sampras’ record of seven Wimbledon titles and he would be setting another record of seventeen Grandslam titles.