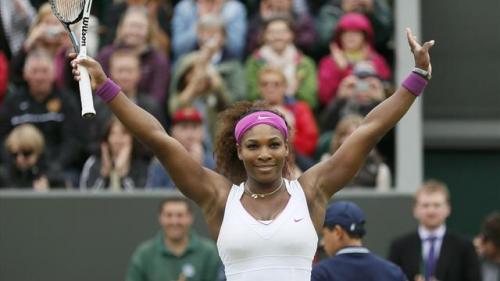 The 30-year-old American beat Poland’s Agnieszka Radwanska 6-1, 5-7, 6-2 in her seventh Wimbledon singles final to win the title for the fifth time on Saturday.

The title is Serena’s 14th grand slam singles title. She fell flat on the court after the victory before getting up and then climbing through the crowd to hug father, Richard, and the rest of her entourage. She had suffered serious health issues after cutting her foot, and was out for a year since winning her fourth title in 2010.

An elated Serena was short of words to describe how she felt after winning the title, which meant she has equaled her sister in terms of the number of Wimbledon titles won. In her words, “I can’t even describe it… I almost didn’t make it a few years ago. I was in hospital but now I’m here again and it was so worth it. I’m so happy… Just never give up, you can continue. Thank you, guys in the box today, daddy, mum – I can’t name everyone one but thank you from the bottom of my heart.”

This victory means she is the oldest women’s singles winner since Martina Navratilova won the title in 1990 at the age of 33.