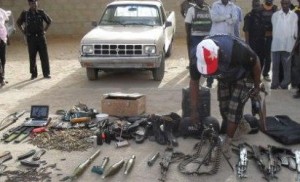 A total of sixteen (16) policemen were on Friday arrested in Gusau, the Zamfara State capital by the Inspector General of Police Anti-robbery Squad for allegedly releasing Police weapons and ammunition to armed robbers terrorising people of the state. The affected police officers are from various ranks, especially Inspectors and Sergeants attached to Zamfara State Police Command.

In the same vain, the squad arrested a retired military officer based in Gusau who specialised in selling ammunition and other sophisticated weapons meant for the security personnel in the state to armed robbers and people of Plateau and Kaduna States.

The head of the operation team, Alhaji Ali Kwara described the operation in the state which resulted in the arrests as very successful while commending the state police commissioner Mr. Arkila Usman Gwary for his support and cooperation. According to him, about 3, 000 ammunitions and other brand new modern sophisticated weapons that have not been used by the police were recovered from the ammunition dealer in the state.

He said a shop was also discovered at the Gusau modern market where the retired military personnel sell ammunitions and guns. Alhaji Ali Kwara further disclosed that, the dealer had also confessed that he had been selling ammunitions and guns to the members of the two major religion groups in Plateau and Kaduna States (Muslims and Christians) for a long period.