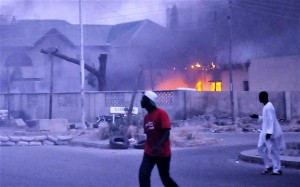 Information has it that multiple bomb blasts have hit two police stations in separate parts of Sokoto, Monday morning. Sources say the attacks were carried out by suicide bombers suspected to be members of the Islamic militant sect, Boko Haram.

Sokoto is one of the few Northern states that have so far remained peaceful since the Boko Haram rampage in the North began. Monday’s first attack was reported to have been targeted at the office of the Assistant Inspector General of Police in the city at Marina.

This attack has left at least one police officer dead while several other people were injured, including policemen on duty. However, more details on the attack are yet to be given.

The second blast which was also reported was said to have hit Unguwar Rogo Police station in the Sokoto metropolis. No information about the casualty – if there are any – of this second attack has been gotten yet. Sokoto is the second state in the North in which there have been attacks on Monday alone. The attacks are also coming against a background of intense pressure on the president from the international community, about the security situation of the country.