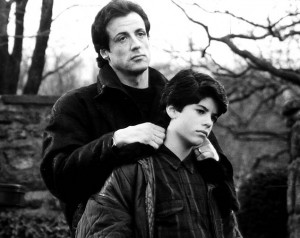 Sylvester’s son dies tragically of an overdose.
News has broken that Sage Stallone, the son of Sylvester Stallone had died yesterday, Friday, July 13.

Sage died of an overdose of pills. He was 36.

Sylvester’s rep, Michelle Bega, tells us, “Sylvester Stallone is devastated and grief-stricken over the sudden loss of his son Sage Stallone. His compassion and thoughts are with Sage’s mother, Sasha. Sage was a very talented and wonderful young man. His loss will be felt forever.”

A source close to Sage tells us, exclusively, “This comes a s complete shock! Sage was just at his agent’s office a couple of weeks ago and he seemed perfectly fine. Sage was a really good person. Everyone is just devastated.”

Sage was an actor, director, and producer. He appear in two of his dad’s films, Rocky V and Daylight. In 1996, he co-founded his own production company, Grindhouse Releasing.

He has one brother, Seargeoh Stallone. He also has three half-sister from his father’s third marriage to Jennifer Flavin: Sistine, Sophia, and Scarlet Stallone.