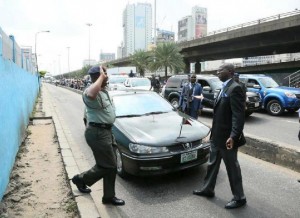 According to him, no military personnel are above the law of the land.

Yusuf and Adeomi were brought before a court martial along with 11 others charged with murder and financial misappropriation.

The two army personnel were apprehended by Fashola as they  were driving along the BRT lane in their Army Green Peugeot 406 with registration number BO1150NA.

He said their action contravened  state traffic law and regardless of their apology to the governor, they would pay the N 25,000 fine.

Minimah said that the fine would serve as a deterrent to others, charging other soldiers to obey the laws of  the state, including taking the BRT lane.

“No army personnel should take the BRT lane because they are designated for buses, if we get it right it is for our common good.’’

He said further that the law was meant for Lagos residents, adding  that the military should help in  enforcing  the law.

“In this regard, we will continue to help the State Government in enforcing the law.’’

Meanwhile, the President of the Court Martial instituted by Minimah, Brig.-Gen. Edward Nze, said the other  11 army personnel were being  court martialled for murder and financial misappropriation.

Nze said court martial was an instrument used by the Nigerian Army to instil discipline in its men and officers.

The offences ranged from murder through  misappropriation of funds to absent without leave  punishable under the Nigerian Armed Forces Act.