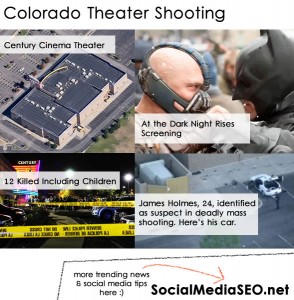 The Colorado Shooting story made news about two weeks ago when James Holmes, a postgraduate student in the united states visited a cinema in Colorado and opened fire on the people randomly. The attack killed 12 people and left nearly 60 others injured.

However, fresh information from about the killings revealed that three men jumped on top of their girlfriends as the bullets flew through Theater Nine at Century Cinemas in Aurora, Colorado during the shooting. Amidst the chaos, amidst the gunfire and amidst tear gas, these three men thought of the women they loved and used their bodies to protect them. They threw them to the floor, under the seats; they held them tight. They held onto their beautiful women as tight as they possibly could. Lying on top of their bodies in case a bullet came their way.

All three girlfriends survived the killings. They are Jansen Young, Samantha Yowler and Amanda. And one of them, Jansen, had the courage to recall those last moments, “There was kind of a break in between each gunshot. Every gunshot, I was like, ‘This is it . . . I’m done for.’ Jon gave me one good push against that concrete again and then . . . I didn’t really feel his arms against my back anymore but I knew he was still there.” When the gunshots went quiet, Jansen realized her boyfriend was shot. “I started shaking him and saying, ‘Jon, Jon, we have to go . . . it’s time for us to get out of here.” But he didn’t move. His breath was gone.

One wonders if a typical Nigerian would do that for their women.