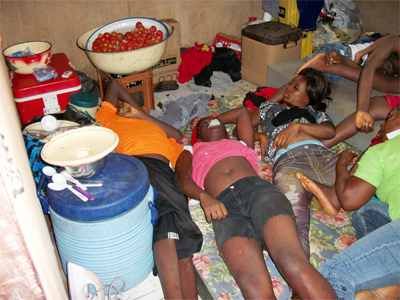 Tragedy struck Sunday morning at Umuakoro Village in Emekuku Owerri North Local Government Area of Imo state when 9 bodies of the Pascal Njoku Family were found dead at their residence in the early hours of the day.

According to sources, Mr. Pascal Njoku who worked and resided in Port-harcourt, Rivers state, had come back home for the final burial ceremony of his mum who died some months ago. He was accompanied by his wife, 5 children, his sister-in-law and her son. Shortly after the burial on Saturday, they all went to their respective rooms to sleep.

However, in the early hours of Sunday, all nine of them were found dead. At the moment, the reason of their deaths could not be ascertained. But sources said their mouths were all foaming profusely when the bodies were brought out of the rooms.

The Imo State Commissioner of health Obi Njoku who visited the scene of the occurrence said from the foaming found in their mouth, there is a possibility that they might have died of food poisioning. The commissioner has also informed that the state government will carry out an autopsy to know the cause of their death.