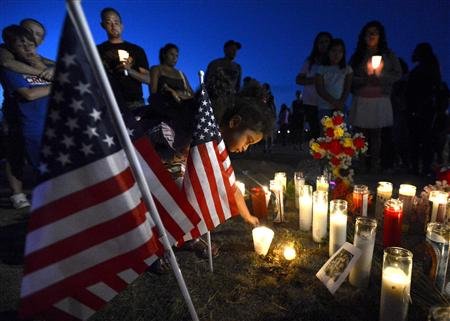 A candlelit vigil has been held in Aurora, Colorado, as the US begins to mourn the people killed by a gunman at a showing of the new Batman film, the Dark Knight Rises.

US President Barack Obama ordered flags flown at half mast.

A gunman wearing a full suit of tactical body armor, a helmet and a gas mask opened fire at a packed midnight showing of the Dark Knight Rises in a Denver suburb on Friday, killing 12 people after setting off two smoke bombs in the dark theater.

Armed with an assault rifle, a shotgun and a pistol, the black-clad gunman wounded 58 others in the shooting rampage at at a mall in Aurora, turning the movie screening into a chaotic scene of dead or bleeding victims, horrified screams and pleas for help, witnesses said.

Officers who arrived on scene within 90 seconds of the first emergency calls quickly took suspect James Eagan Holmes, 24, into custody in a parking lot behind the cinema, where he surrendered without a fight, Aurora Police Chief Dan Oates said.

He will appear at Arapahoe County District Court, in nearby Centennial, Colorado, on Monday at 09:30 local time (15:30 GMT).

Hundreds of mourners gathered in Aurora for the vigil.

Candles and flowers were left on the lawn. One letter read: “To all the innocent souls… This is for you. We will never forget. This is Aurora.”

At the Queen of Peace Roman Catholic church, Denver Archbishop Samuel Aquila told mourners: “Blessed are those who mourn, for they will be comforted. The heart of our Father is stronger than the bullets that killed 12 people.”

In a briefing at the end of the day in Colorado, an emotional Governor John Hickenlooper confirmed that the casualty figure had been revised down one, to 70 people killed or injured.

Thirty people remained in hospital, Mr Hickenlooper said, with 11 of those in a critical condition.

“It’s an act that defies description. Everyone I’ve talked to all day is filled with an anger that can’t find focus,” he said.