Kyle Glover  11-year-old son of Usher’s estranged wife Tameka Foster  is in critical condition in an Atlanta hospital after he was struck by someone riding a jet ski, Glover who was sitting in an inner tube on Lake Lanier when he was hit in the head,   has being unresponsive since he was taken out of the water.
Kyle  has not experienced any brain activity since he was admitted to the hospital, doctors have declared him brain dead and  there has been no decision yet as to whether or not to take him off life support. 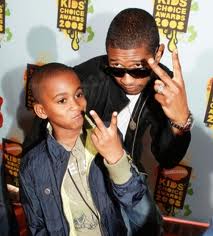 However, despite Usher’s  divorce from his wife, he chartered a plane for Tameka, who was out of town, to be by her son’s side, he also arrived the hospital last night, and has since not left the child’s side. Meanwhile,  celebrities have showed an outpour of support on Twitter following the singer’s terrible tragedy this past weekend.