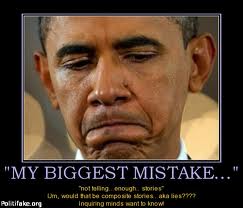 President Barack Obama says:  ‘My biggest mistake since getting to the White House three and a half years ago has been my tendency to tackle the job as national policy wonk rather than the inspiring figure I cut in the 2008 campaign’.

“When I think about what we’ve done well and what we haven’t done well,” the president told CBS television in an interview, “the mistake of my first term – couple of years – was thinking that this job was just about getting the policy right.”

“And that’s important. But the nature of this office is also to tell a story to the American people that gives them a sense of unity and purpose and optimism, especially during tough times,” Obama said in an excerpt of the exchange with Charlie Rose.