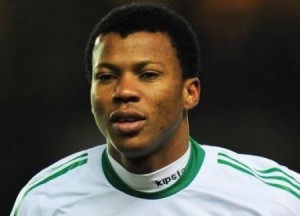 The talented forward who scored three goals to help Granada retain their La Liga status at the end of last season seems to have accepted what destiny has thrown his way and wants to make the best of playing in the second division in Spain again after his exploit in the 2005/2006 season.

The Nigerian had initially declared emphatically that he would not go down with Villareal who were relegated at the end of last season from the Primera Liga but seems helpless now that the club wants him to lead their attacking charge for a quick return to the first division.

“At the moment, I feel great being among the present set of players. I know majority of them already and we often chat online. I’m working hard, trying to be in great shape and help the team next season. I talked to the coach and he explained everything in details about his programmes though he is a very young coach.”

“He said  we must be united to achieve our objectives. I’m here to work and contribute something to the team and probably emerge as top scorer in the second division again.”

“ It will not be easy, but the quality is in this team and we cannot afford to lose the opportunity. Pressure is normal and everyone knows how important it is to return to the first division,”Uche said on the club’s official website.

Meanwhile, the former Real Zaragoza striker has admitted that it promises to be a long and very difficult season for Villarreal but expressed absolute trust in his team mates.

“It will be very complicated, but we have to work together, know what we want and try to win games because it is the path to the first division. Personally, the past experience will help me to face this new challenge,” he concluded.