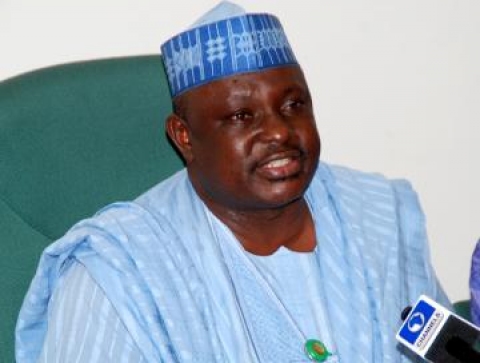 As if the tribulations facing Farouk Lawan are not enough, on Thursday, one of his alibis in the bribery scandal surrounding him seemed to be slipping away from his control. Mr. Adams Jagaba, the chairman, House of Representatives Committee on Drugs/Narcotics and Financial Crimes, Mr. Adams Jagaba, was on Thursday drilled on his involvement with the Farouk Lawan bribery case. After denying any such involvement, the lawmaker has taken a further step of threatening to drag Lawan to court for “blackmail”.

The lawmaker from Kaduna State addressed journalists shortly after the House Committee on Ethics and Privileges quizzed him over the bribery allegation. He said: “I cannot and shall never be involved in an individualistic act that runs antithetical to national interest… Lawan should stop this blackmail forthwith or else, I will have no option but to take the appropriate legal action against him and to seek compensation befitting my status… Enough is enough.”

According to Lawan, after receiving the money, he reported the issue to Jagaba in writing and attached $500,000 to the letter he handed over to him.

But, Jagaba has explained that during a meeting which the Special Task Force (STF) organized between himself and Lawan on July 11between 3pm and 4pm, Lawan was unable to say it to his face that he gave him any money. According to Jagaba: “We faced each other before the STF. I then put the question: ‘Hon. Farouk, did you give me $500,000 or any money for that matter?’ This was a question the outspoken Farouk could not answer. He kept mum till I left.”