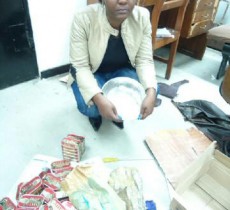 A South African woman of Zulu tribe, Duru Gcinukwazi Lindiwe, 39, has been caught with 5.5 kilogrammes of substance found to be methamphetamine hidden in tins of sardines as well as in her luggage.
Officials of the National Drug Law Enforcement Agency at the Murtala Mohammed International Airport, Lagos detected the drugs during routine search at the departure hall.
The suspect, a street cleaner in Johannesburg, was apprehended during the outward screening of passengers on a South African airline flight to Johannesburg, South Africa.
The drug, with an estimated street value of N15 million in Lagos, was hidden in tins of sardines as well as in her luggage.
The NDLEA Airport Commander, Hamza Umar, said that a detailed search carried out on her based on suspicion yielded positive result.
Umar said: “She was travelling with a carton of sardines.
“When one of them was opened, the content was methamphetamine.
“Some of the drugs were also packed in a false bottom of her luggage.
“The total weight of drugs found in her possession weighed 5.5 kilogrammes.”
Lindiwe, who is married with a daughter, told narcotic investigators in her statement said that her love for sardines has turned sour since her arrest.
In her words: “I love sardine for salad and sandwich.
“My Nigerian boyfriend gave me the carton of sardine as a gift because I love sardine.
“When my bag was searched at the airport, 5.5 kilogrammes of methamphetamine was found and I was arrested.
“I am missing my eight-year-old daughter because I travelled to the Philippines to study music for over a month.
“I am only in Nigeria to visit my boyfriend before going to South Africa.”
The Chairman/Chief Executive of the NDLEA, Ahmadu Giade, said that efforts are ongoing to apprehend more persons in connection with the illegal exportation of methamphetamine to South Africa.
According to Giade: “We have launched a full scale investigation into the case and we expect to arrest other members of the drug cartel.
“Drug traffickers are warned to quit the criminal act or face severe sanctions under the NDLEA Act.”
Meanwhile, she will be charged to court as soon as investigation is concluded.
It will be recalled that in December 2011, a South African lady, Nene Fikile Happy-Girl, 38, was caught with drugs while attempting to board an Emirate flight to Malaysia.
She excreted 55 wraps of substances that tested positive for methamphetamine, weighing 700 grammes.
She had since been charged to court and the case is ongoing.