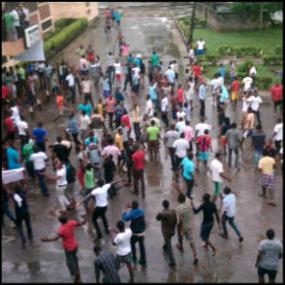 Reports came in that there was pandemonium yesterday, at Ojuelegba, Surulere area of Lagos State when irate students allegedly from Yaba College of Technology, YABATECH, took to major highways and went after officials of the Lagos State Transport Management Authority,( LASTMA), wounding at least four of them and abducting one .

Our correspondent gathered that the students, numbering about 50, armed with various kinds of weapons, blocked major highways midday and went after LASTMA officials to protest against the seizure of one of their buses branded “Aluta bus” which was said to have contravened the state government law by driving on Bus Rapid Transit (BRT) lane.

In the ensuing melee, there was a serious traffic jam along the axis designated as one of the alternative routes by the State Government to bring relief to motorists trapped in traffic gridlock as a result of the ongoing repair works on Third Mainland Bridge.

LASTMA General Manager, Engr. Babatunde Edu, who confirmed the development, revealed that one of his men Mr. Obasanmi Oladimeji was abducted in the process at his duty post at Jibowu, Yaba by the irate students.

He explained that, “The students’ union red Mazda bus with no registration plate number and in scripted with “Yaba College of Technology students Union Government Aluta bus” around 1.45pm on Wednesday violated the BRT law by taking the dedicated lane and was stopped at post office bus stop inward Oyingbo.

“The eight occupants including the Union leader, Comrade Adesola Ademola, became unruly and resisted arrest when stopped by the head of the operation Zone 15, Mr. Kayode Odunuga.

“With the intervention of the Anti Robbery Squad attached to Denton Police Station who were at the scene of the incident, the offenders were arrested and later remanded and the vehicle taken to the LASTMA yard.

“On getting to the LASTMA yard, the students’ union leader who was remorseful and pleaded for the release of the bus said that they were in a hurry to get to a meeting at Marina, hence they decided to take the lane. The agency been trained to be firm but humane listened to their plight and directed that an undertaken should be written so as to detail the incident and also prevent future occurrence,” Engr Edu said.”