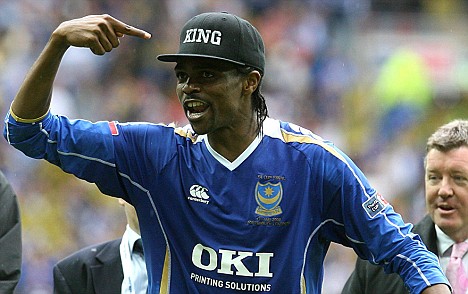 In response to the club’s threat to take disciplinary action against the player, Portsmouth’s Kanu Nwankwo is planning to sue the club for their failure to pay him his earnings over a period of six (6) years. According to Kanu, Portsmouth Football Club owe him “millions”.

Portsmouth had been threatening to take disciplinary action against the player for refusing to show up in training among other offences. However, in a statement credited to Kanu’s lawyer, Samuel Okoronkwo, he said “I have been given authorisation to speak on Mr Kanu’s behalf. He feels very aggrieved… He has regrettably been forced to serve the requisite notices of breaches of contract by the club, both historically and presently.”

Okoronkwo insists his client is entitled to the money, which is earmarked to keep the club running through administration, “He has been playing and scoring goals for Portsmouth for six years, sometimes playing through injury. Now he is being treated like this… He has lost millions of pounds since 2006 through genuine contractual obligations but has been prepared to wait,” Okoronkwo continues.

He also points out that “Kanu has been willing and able to play and trains every day… But he finds himself unable to return to the club. He wants to be treated respectfully and, on that basis, cannot return to training.”On Tuesday evening Kanu’s attorney lodged a claim with the Football League under the Football Creditors’ Ruling. Okoronkwo said: “We are claiming Kanu is owed millions…It is they who have breached the contract by not fulfilling contractual obligations. Until now he was prepared to wait.