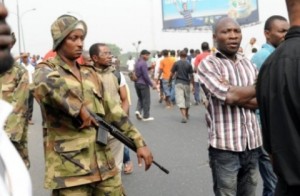 Youths confronted three gun-totting Boko Haram members who invaded Mahuta, a suburb of Kaduna metropolis on Sunday. Prior to this incident, a 20-year-old innocent boy was said to have been killed by these Boko Haram members, and that was all that initiated the reactions of these furious youths.

The brave youths overpowered and arrested two of the terrorists, aged 17 and 22, who had gone to the compound of the District Head of Afaka, Alhaji Abdulwahab, in a bid to kill him.

The Boko Haram members were bearing an AK-47 rifle at the time they invaded two neighbouring Rigasa and Mahuta communities on a motorcycle at 9a.m.

According to an eyewitness, “The gunmen came and said they were looking for the ‘Hakimin Mahuta’ (District Head of Mahuta), disguising as members of his subjects. So, when they allowed them into the house, the ‘Hakimin’ was not comfortable with them, so he ran back inside.

“The suspects ran after him and shot at him severally, but their shots missed him, instead a small boy, Nura was hit. When they discovered that the ‘Hakimin’ had escaped through the back exit, they came back outside and picked their bike and trailed him to Mahuta.”

On getting to Mahuta, the three gunmen started shooting sporadically, but the youths dared them. They moved nearer, even as they were firing at them. An elder in the community, who identified himself as Mallam Abdullahi, said “the young gunmen came on a bike and started shooting, but having discovered that our youths were ready for them, they started withdrawing into the bush and the youths were closing in on them with bare hands”.

According to Abdullahi, “at a point, their bullets got finished and they loaded another round of ammunition, but despite that, the youths were able to apprehend two of the three gunmen, while the last one ran away.”

It was gathered that seven of the youths sustained various degrees of gun wounds but none of them died. They are said to be responding to treatment in a Kaduna hospital.

Speaking on the action of the youths, the Mahuta Ward Head, Alhaji Yusuf Muhammed Mahuta, said the community had long resolved to collectively rise up against terrorists and jealously protect every member of the community against hoodlums.