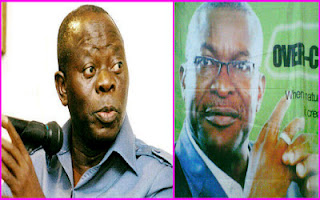 In a move that must have come as a big surprise to all stakeholders concerned, the Peoples Democratic Party candidate in the July 14 Edo Governorship election, Gen. Charles Airhiavbere, has filed a petition at the Election Petitions Tribunal just some hours to the deadline set for the submission of such petitions, challenging the victory of Governor Adams Oshiomole of Action Congress of Nigeria.

In the petition, Airhiavbere and PDP are challenging Oshiomhole, the Action Congress of Nigeria (ACN), Independent National Electoral Commission (INEC), Edo Resident Electoral Commissioner and the state governorship returning officer. The petitioners are claiming that the ‘purported election’ was invalid due to corrupt practices and non-compliance with the provisions of Electoral Act 2010 (as amended).

Among other things, the petitioners are claiming: alleged intimidation and harassment of voters, depriving them from exercising their franchise and constitutional rights in 11 local government areas of the state; the lack of any link between Oshiomhole and the academic qualification he presented.

They further claimed that INEC invalidly returned Oshiomhole as duly elected in spite of the fact that the election was not concluded in compliance with the provisions of the Electoral Act 2012. And, finally, they claimed that Oshiomhole, who was returned as the winner of the election, was not qualified to contest the election of the office of the governor of Edo State.