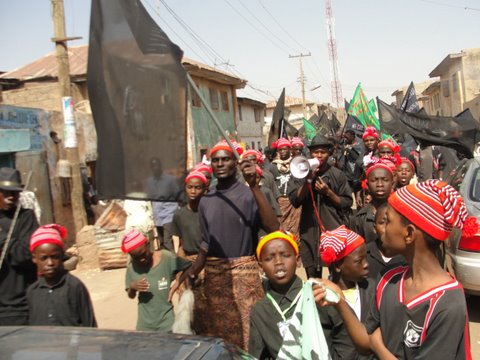 The weeklytrust describes Sheikh Shehu Uthman Anaga, formerly Sylvanus Anaga, as one of the leading Igbo Muslim scholars from Ebonyi State. Sheikh Anaga says lack of adequate propagation and enlightenment are the main factors militating against the spraed of Islam in eastern part of Nigeria.’ The interview with the Muslim Igbo man led to the following:

Tell us a little about yourself.

I was born in Ebonyi State. I became a Muslim in 1972, but left the eastern region in 1973 in search of education. I didn’t return to Igbo land on permanent basis until last year, 2011, but I am not staying in Abakaliki. Before I left this part of the country (north), I was the Provost of the Jama’atu College of Education, Kaduna.

How old were you when you became a Muslim?

I was 13 years old when I converted to Islam. Islam has its way of taking somebody. I am aware that many people converted to Islam after they had listened to preachings, but my own case was different, because I saw it in a dream. At a time when I was sleeping, I heard a loud noise coming from outside my room. When I went out to see what was happening, I saw many people lined up. When those people saw me, they asked me to come. When I joined them, we all bowed in sujud (prostration).

After some days, I heard the same voice again in a dream. So, I went out, but this time around what I saw was white people who told me that I should join them without any waste of time. We made the same sujud. On the third occasion, when I went out, I saw some people performing ablution and I joined them. That was where I learnt how to perform ablution, because the people taught me.

When I told two very close friends of mine, Ignatius queried whether I want to become a Muslim while Hassan accepted to be a Muslim with me because of what I saw in my dream.

After some months, we went to Nsukka to meet one Ibrahim Idah to learn about the religion. He is also an Igbo man who converted to Islam before us, but he was not all that knowledgeable. It was there that we met some Hausas. After asking us how we became Muslims, they administered the Kalamatu Shahada (testifying the oneness of Allah) for us.

In the middle of 1973, we went about telling people that we are Muslims, friend of mine and myself, Muhammad Ologo. In the course of that, we came across a pamphlet by an Islamic missionary in Ilorin. We wrote a letter to them and they asked us to meet them in Ife. That was how we started learning the Islamic jurisprudence. In 1974, I got admission to read Islamic Theology at the Islamic Education Trust, Sokoto. When I graduated in 1975, I started working with the JNI as a preacher. I did my Grade II at the Kaduna Teachers’ College but still working with the JNI. That was how I picked up in learning the Islamic Jurisprudence.

In 1984, I got admission at King Sa’ud University in Riyad, Saudi Arabia where I did my BA in Islamic Studies. When I came back, I was taken to the Jama’atu Institute for Arabic and Islamic Studies where I was given the duty of reviving it. I was made Vice Principal and later became the Principal. In 1996, it was upgraded to College of Education and I was made the Ag Provost. That was how I did my masters and now I am pursuing my PhD.

Were you with your parents when you became a Muslim, if so, what was their reaction?

Yes, I was with my mother because my father was already late then. One interesting thing was how I resisted all the pressures from the community, and because of that, my mother became a Muslim and died one year after. That was how I left my home to search for knowledge, because at that time I don’t know how to worship God. I just used to be making sujud while people gather around to be looking at me as a mad man.

What can you say are the challenges of Igbo Muslims?

In fact, I thank God; because when I went home recently, it was not like the time we converted to Islam where we were very few. Now, things are changing as we have many Igbos who are Muslims now. Another interesting thing is how some state governments in the east are now recognising the presence of Muslims in their states.

Despite all that, Igbo Muslims are still considered as disgrace to their families. This is one major challenge. If state governments of the east intend to help Islam and Muslims, they are forced to back out, because of pressure from the church and the people. There was a time Muslims went to pay Sallah visit to Governor Martins Elechi and he promised to build an Islamic school for the in Afikpo. People, including the churches, rose up to say that he is trying to Islamise the state. This is to tell you how serious the challenge is.

Muslim Igbos are not allowed to work in the services of their various states. In Ebonyi, I know of only four Muslims who are working with the state government. In fact, one of them converted to Islam when he was working. The perception is that if you are an Igbo man and you decide to become a Muslim, then you are not a normal human being.

In the schools, there is no provision for Islamic Studies. Every student is made to study Christian Religious Knowledge. Even in our universities, there are no departments for Islamic studies. I think it is only in Port-Harcourt that we have Department of Islamic Studies in the whole of south east and south south.

What efforts are you making to change the trend?

If people are use to something for many years, it would take time before you can bring change. The first effort we are making is bringing ourselves together. This would enable us to determine our present situation, the future of our children and everything about us as Muslims. We are not terrorists; we are not extremists; we are only Muslims who preferred Islam as a way of life. We are followers of Prophet Muhammad (pbuh), that is why we are not fighting. We are gradually demanding for our rights. We are saying that it is not mandatory that every Igbo man must be a Christian. We know there are non-Christians among the Igbo who are not Muslims. I want the Igbo people to borrow from the Yoruba who tolerate one another despite differences in religion, because everyone would be accountable for his own deed before God. We feel that this situation can change if we are given airtime on both the radio and television for people to hear what Islam is all about. Muslim organisations like the JNI should propagate Islam in the east through sponsoring preaching and publications in the form of books and pamphlets. This perception of Islam in the east came about largely due to inadequate publicity and awareness campaigns. Therefore, the JNI, northern emirs and other well-to-do Muslims should do more in this regard.