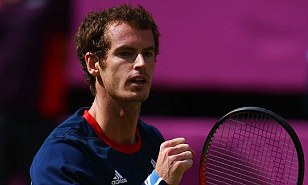 Britain’s Andy Murray has defeated Switzerland’s Roger Federer to clinch his first ever Olympic gold. The Scot beat the 16-time Grand Slam winner in straight sets, winning 6-2 6-1 6-4, in front of a rapturous crowd on Centre Court.

Just 28 days ago, Andy Murray had been reduced to tears after losing this year’s Wimbledon final to the same Federer. It was the first time ever the 25-year-old had beaten Federer in a five-set match. This also marks his first major tennis title, even as the four major championships (the Grand Slams) still elude him.

The British No 1 still has another chance to claim yet another gold medal in the mixed doubles final when he and Laura Robson take on Belarusians Victoria Azarenka and Max Mirnyi barely 45 minutes after his victory in the singles.

In the singles finals, Murray had come all out, taking the first set with two breaks of Federer’s serve. The seven-time Wimbledon champion then went almost an hour without winning a game as Murray tied up the second set 6-1, before winning the third to claim a straight-sets victory and Olympic gold.