For the first time in 200 years, the annual three-day durbar, or horse parading ceremony which is mostly associated with the Eid celebrations in Kano, has been called off.

In a statement, palace official Abbas Sanusi said the Emir, Alhaji Ado Bayero, could not go ahead with the durbar festival, known as Hawan Sallah, because of his “fragile” health. The emir’s palace said the public should pray for his recovery and for peace to return to Kano state.

It would be recalled that sometime in July of 2012,The Emir of Kano, Ado Bayero who has been on the throne for 49 years, had gone to the UK for medical treatment of undisclosed ailment. 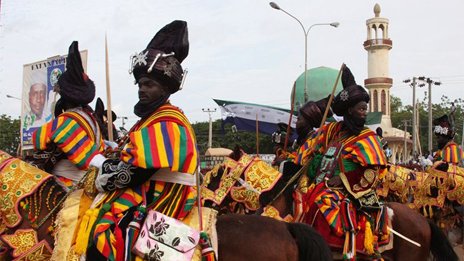 The annual durbar is a colorful event that sees thousands of people – mainly Muslims from the Hausa ethnic group and foreign tourists gracing the occasion where the Emir is expected to ride a horse for three days. The festival also serves to honour the power and heritage of the Hausa community – one of the largest in Nigeria.

However, many are of the view that the cancellation is due to growing security concerns as it regards the recent spate of bombings by boko haram in the ancient groundnut city. What do you make of it?