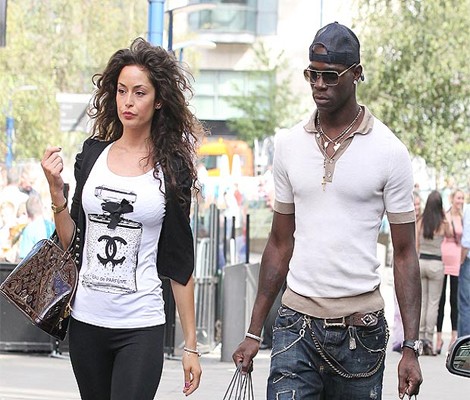 It has come to the light of the media that the ace footballer Mario Balotelli, has been  stalking his former girlfriend with abusive phone calls in the middle of the night.

This came with the report given by his pregnant former girlfriend herself, and this is how daily mail reported it:

Raffaella Fico, 24, dated Balotelli, 22, for a year but they split up in April after a furious doorstep bust-up involving the police.

The row kicked off after she had confronted him over his numerous affairs – including trysts with former escort Jennifer Thompson, famously bedded by Wayne Rooney.

Last month underwear model and former TV star Raffaella revealed she was pregnant and expecting a baby in December by Baloteli – but he hit back and demanded a DNA test to prove he was the father.

The bitter war of words has continued between the Manchester City striker and Raffaella throughout the summer and she has hit out again at him, claiming he’s been stalking her and causing her stress.

In an interview with the latest edition of Italian glossy weekly Diva e Donna, Raffaella, who proudly showed off her bump, said: “I just want to ask Mario Balotelli to stop calling me in the middle of the night.

“I want this to be a calm, tranquil pregnancy. I thought he was calling me to find out how I was but he shouted and called me names.

“He was trying to stress me psychologically. He wants to stalk me. All I ask of him is respect, at least for the sake of our baby.”

Raffaella added: “Mario must have called me over 30 times. I thought he was calling to find out how I was, but he shouted and called me names.”

Raffaella, who also counts Cristiano Ronaldo among her former boyfriends, said: ”I never thought that the happiest moment of my life would turn out to be the most difficult.

“I just want my mother Antonietta and my brother Francesco with me when I give birth.”

She also revealed how she had cancelled plans for a relaxing cruise at the last minute because she feared for the health of her unborn baby.

Raffaella said: ”I had a turn, I felt ill and I went to my gynacologist straight away. Every little thing that happens to you when you are pregnant you live with anxiety, fear.

“The doctor calmed me down and said it was all down to the heat but she advised me to cancel the cruise holiday. She recommended I spend as much time as possible at home resting. It was a big fright but thankfully everything was ok.”

She added: “Everything is ok apart from these telephone calls in the middle of the night from Mario Balotelli. He knows the baby is his and he will be left with a lot of egg on his face.

“Asking me to take a DNA test was such a humiliating insult. I can’t wait to do it once the baby is born – now would be too risky.”

Raffaella added: “I’m disappointed in him and I’d never get back together with him. We’ll meet for the good of the baby and that’s all.

“If he had told me, ‘Don’t say the baby’s mine,’ I’d have done it. I’d have kept the baby though because I don’t agree with abortion.

“I would never have expected Balotelli to abandon his child. He always told me he was abandoned when he was very young: so he knows what it means.”

Raffaella again insisted that when she had first told Balotelli she was pregnant on June 27 – the day before Italy played Germany in the Euro 2012 semi-final – he had told her: “You have made me the happiest man in the world.”

She added: “He said that if it was a boy he would chose the name and if it was a girl I could. He said that as soon as he was back in Italy we would go together to the doctor’s for a scan.

“Then he just disappeared until he made his absurd (DNA) statement. I don’t think they were his words.

“In essence he has abandoned me. It’s one thing leaving someone but it’s another to leave the mother of your child on her own.”

However, Raffaella has invited the striker to play an active role in their child’s upbringing, saying: “He can see his child whenever he wants. My house will always be open even though he has shown a lack of respect.

“After the baby is born I will be happy to take the test and to publicise the result – the DNA result won’t be wrong: either the baby will be black or white.

“In fact I want to tell Mario to come with me so we can do it together but I wonder if he will show up. He is going to be so embarrassed – he knows the child is his.

“I just hope that then, as he said in his statement, he will accept his full responsibilities as a father. I don’t expect him to abandon his child.”