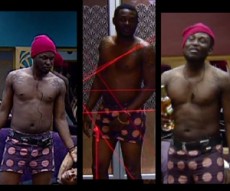 One of the BBA house members -Keitta, may have been evicted from the Big Brother Stargame, but one thing that has remained in the hearts of all his fans across the world is his famous boxer shorts.

In his revelation to the press at the Holiday Inn on Friday, he spoke on how he went into the competition with just two pairs of boxer shorts (Banana Republic’s brand), thanks to Eazzy who did the packing, though not intentionally, he has actually garnered a lot of followership because of the boxer shorts.

Furthermore, Keitta explained, “what happened was that when I go to take my bath, I wash the one I wore previously and then change into a new one”. The next question in line is did he actually do this routine for over seventy days?

In refusal to change his boxers pant since entering the game, a section on the social network on twitter has been created @Keitta_Boxers1 for the younger brother of the grandpapa of Hiplife. So all your questions and comments alike can be channeled there.

News have it that when he came out of the Stargame, thousands of fans, especially the female folks had to line up in regards to this to have photographs taken with the new wonder kid on the bloc.

With his soaring popularity courtesy the ‘famous boxer shorts’, talks are already underway and as soon as it drops confirmed, trust us to feed you first.

Probably in a few months from now, our son will be unveiled as the new ‘Face of Banana Republic Boxers’. Now we get to understand why everyone felt pissed that Ghana sent in four contestants to the BBA Stargame, DKB, Mildred, Keitta and his Famous Boxers.