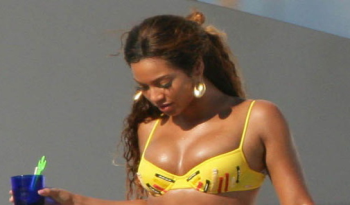 United nations said the music video by the pop singer Beyonce was a social media record.

The music video, “I Was Here,” that was recorded for the UN campaign to generate one billion messages encouraging people to do a good deed spread like wildfire across the world.

The UN said in a statement: “The World Humanitarian Day 2012 campaign has made social media history by sharing more than one billion messages of hope,”

The UN launched its campaign on August 2 to collect the messages, which were distributed on Sunday in honor of humanitarian workers.

The campaign numbers around the world soared after the release of Beyonce’s video on Saturday and the message spread rapidly among her fans.

Valerie Amos, UN under secretary general for humanitarian affairs, praised the “amazing work” of the singer in taking the UN’s cause further.

Beyonce sang the song for the video at the UN General Assembly. The video shows her singing at the UN headquarters and scenes from recent disasters.

“This is our time to leave our mark on the world and show that we were here and we care,” Beyonce said in a statement.