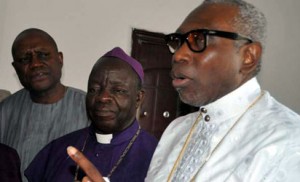 President of the Christian Association of Nigeria (CAN), Pastor Ayo Oritsejafor has condemned the idea of dialogue between the members of the dreaded Boko Haram sect and the Federal Government. He said there is no basis for such. The cleric also criticized the idea of top security chiefs in the country being religious fundamentalists, therefore questioning their loyalty to the nation.

Not escaping the tongue-lashing of Oritsejafor, also, is the Minister of State for Foreign Affairs, Mr. Mohammed Nurudeen, who was reported to have said Nigeria is the most Christian-populated Islamic nation in the world.

Pastor Oritsejafor had been speaking with newsmen in Akure, Ondo State, after an Extra-ordinary Council Meeting of the National Executive Council of CAN. According to him, “The Boko Haram people are a bunch of cowards, who go to churches to shoot people that are not armed. If they think they are strong, they should go to places where the people they are going to attack are also armed.”

On the idea of dialogue, the cleric has this to say: “I do not understand what they would be talking about. What are they going to discuss? It is puzzling. I see a total religious fundamentalism in the whole episode. If there should be a dialogue, there should be a basis… If you are talking of dialogue and the same sect of people are killing innocent souls, so what is the basis? To me, there is no basis for dialogue.”