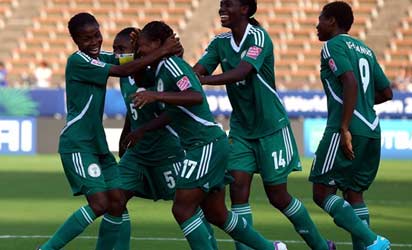 Nigerian Under-20 female National football team, the Falconets, are doing the country proud in faraway Japan where they are representing the country in the female Under-20 World Cup.

The falconets secured a qurter-final ticket early Sunday morning after beating their counterparts from Italy by four goals to nothing. In the process, Francisca Ordega scored three times. Two goals in each half saw Nigerias’ Falconets to a comfortable victory in Kobe. Ordega had opened the scoring nine minutes from half-time. Her second goal came shortly afterwards – just before halftime.

Ordega’s third goal, came just two minutes into the second half. However, substitute, Osarenoma Igbinovia made it four with a few minutes to go. The victory means Nigeria will now be meeting either Japan or New Zealand in the next stage.

But, the hat-trick girl might be doubtful for the quarter-final fixture as she had to be stretchered out of the pitch after sustaining injury with just minutes to the end of the match.