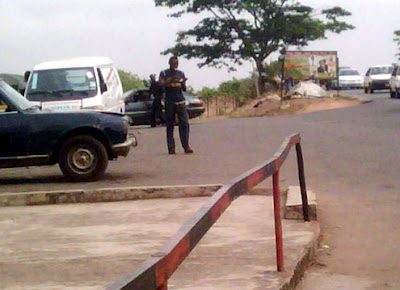 A commercial motorcyclist, popularly called okada rider was on Monday stabbed in the stomach by two hoodlums suspected to be Fulani herdsmen on the long bridge end of the Lagos-Ibadan Expressway.

It was learnt that the victim, Mr. Owolabi Habib, had picked his assailants at Berger, Lagos, who posed as passengers and claimed they were going to New Kara, located around the long bridge.

A source within Habib’s family said, “As soon as they got near their destination and Owolabi slowed down, one of the men pulled out a long knife and stabbed him in the stomach.
“Habib told us that he abandoned his okada and fled to save himself. But the stab was so deep that his intestine came out.”

It was learnt that a motorist later rescued Owolabi and rushed him to the Lagos State Accident and Trauma Centre at Tollgate.

Findings on Wednesday showed that Owolabi had been referred to the Lagos State University Teaching Hospital. A doctor at the centre, who declined to give his name, said, “The wound he sustained needs intensive care. That is why he was moved to LASUTH.”

It would be recalled that a retired Brigadier-General, Sylvester Iruh, was on July 7, 2012, killed on the bridge by suspected Fulani herdsmen as he was changing the tyre of his car.