Home Metro News “Give the whole money in the Niger Delta to the North, it...
Facebook
Twitter
WhatsApp 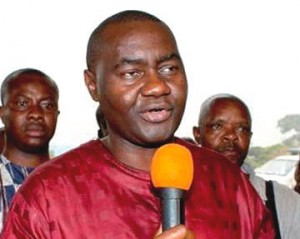 In an open challenge to Northern leaders, a member of the upper chamber of the Nationa Assembly, Senator Magnus Abe has taken another approach to the constant complaints emanating from the Northern parts of the country in recent times about various problems facing them.

Senator Magnus Abe, representing Rivers South-East Senatorial District in the National Assembly, has challenged the North to contribute its own quota to the development of the Nigerian economy. The senator made this clear while having a chat with newsmen in Port Harcourt.

The Chairman, Senate Committee on Petroleum (Downstream), noted that the country could not afford to rely on crude oil alone, stressing that the nation must look beyond oil revenue in the development of Nigeria’s economy. And, in apparent reaction to a statement credited to Sen. Abba Ibrahim, that the country’s wealth had been cornered by oil producing states, he said:

“Why is it that every time Nigerians gather, all we talk about is how money is being spent? How come in this country we never gather to talk about how money is being made? If you give the whole money in the Niger Delta to the North, it won’t solve their problems. The challenge of Nigeria is that the country is not productive enough.”