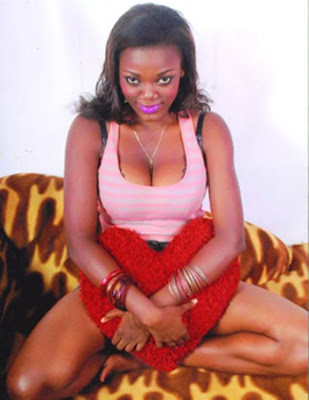 Wonderfully tall and sizzling hot Hannah Ojo, who hails from Ekiti State, talks about her challenges and love for acting.

Are you ready to pay the price to become a star?
When you talk about paying price, I have been doing that since 2005. It is not easy as I said but it has to do with determination. I could have said okay I want to turn back after two years that nothing came out of it but I saw that there is something in me that really want to go ahead. I have paid the price in terms of money and I am still willing to pay more prices.What do you mean by paying money?
Actually, in some productions, you would be asked to pay and register under them to be a member before they would start giving you jobs. There are so many productions like that, where you pay and at the end of the day, they would not do anything. They would give you scripts, you waste your time to study it, to go for rehearsals and at the end of day, they would not do it. It might take you two weeks to go for rehearsals consistently, but at the end, your money and energy would be wasted.

You said that you are ready to pay more prices, if you are to sleep with a producer or director, would you do that?No, I won’t do that. I have had stuffs like that but I turned back because I didn’t want to get famous through that means.

Since 2005 till date, how many movies have you acted?
I have done three movies and so many soap operas. I did My Story, Wrong Passion, Edge Of Paradise, Needle’s Eye, Burning Spear, Private Sector, Clinic Matters and many others.