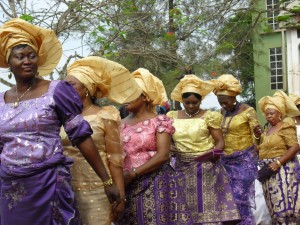 A Catholic Church, St Theresa’s Catholic Cathedral Church, Nsukka, Enugu State, has barred women from wearing big headgears and carrying handbags to Masses because of the increasing height of insecurity in the country.

The Cathedral administrator, Revd Fr. Uche Obodoechina, announced this during Sunday service in Nsukka, saying the ban would take effect from September 9. He further assured that the measure was being introduced to ensure the security of worshippers. According to him, the big headgears made the identification of persons during service difficult most of the time. He said the headgears (popularly called canopy) turn to a ‘barricade’ when many women putting on big headgears stayed on a row during service.

The clergyman further announced that cars would henceforth be parked at the St Theresa’s College field while only motorcycles would be allowed to park at the designated places within the church premises. Also, for those coming for 5.30 a.m. mass, the gate leading into the church would be closed by 6 a.m. while the gate for those coming for the 7.30 a.m. would be closed by 8 a.m. he continues: “So if you cannot come before this time, you are late and you will not be allowed to enter into the cathedral compound.

“We urge members to cooperate and obey the directives in the interest and safety of all… These are temporary measures and will be relaxed as soon as the security challenges in the country improved… The church is sorry for whatever inconveniences the measures will cause members.”