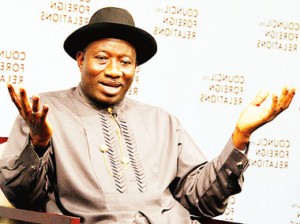 The leadership of the ruling Peoples Democratic party (PDP) has opined that President Goodluck Jonathan is on course, as long as the PDP’s agenda for the country is concerned. This was made known in a statement by the National Publicity Secretary of the party, Mr Olisa Metuh, in Abuja on Tuesday.

According to Metuh, “We have no doubt whatsoever that the president is on course, he will continue to deliver on the PDP promises to the people of Nigeria… Quite a lot has been achieved in the various sectors and there is no gain saying that the government needs the continued support and prayers of Nigerians to do more.”

The PDP spokesperson also pointed out that some are working tirelessly to make sure they bring down the Jonathan administration. These people, Metuh described as desperate politicians. And he has assured that their plans will fail, pointing out that the Goodluck Administration has achieved a lot since its inception, with particular emphasis on the power sector and the encouragement of foreign investors in the country.

He then assured Nigerians that the best is yet to come from the Goodluck/PDP administration: “The unity of our dear country and the welfare of the citizenry shall continue to be paramount… We wish to assure all Nigerians that there are better days ahead.’’