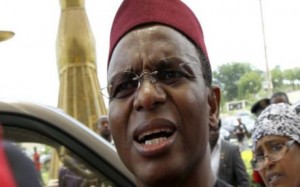 One time Minister of the Federal Capital Territory, Mallam Nasir el-Rufai, has asked President Goodluck Jonathan to quit if he could not solve the growing security threats to lives and property in the country.

Mallam el-Rufai made this statement in an interview with Vanguard newspaper which was published o the newspaper’s website. The former minister condemned the way innocent souls are being slaughtered daily without any response from the administration.

El-Rufai’s statement appeared to be a response to Chief Edwin Clark’s assertion that northern leaders were not doing enough to curtail the Boko Haram sect. While dismissing Clark’s allegation as untenable, the former minister warned the elder statesman to desist from making inflammatory and unverified statements capable of exposing him to ridicule instead of applause that he deserves at his age.

He then pointed out that President Goodluck Jonathan has already made it clear to Nigerians and the international community that he is unable to handle the security situation of the country: “Why is it that only President Jonathan cannot solve Nigeria’s security problem?… If he cannot do the job for which he was elected to do, he should consider going home. No president has ever sought the help of the ordinary people in tackling security problems in this country.”