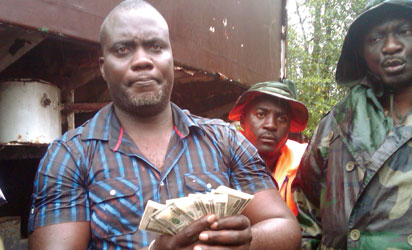 A certain Mr. Joshua Orupere, 40, was on Wednesday apprehended by members of the Joint Task Force (JTF) as part of an operation codenamed Operation Pulo Shield for allegedly attempting to bribe the outfit with $30,300 (N4.65m).

Mr. Orupere allegedly offered the bribe to the JTF in order to secure the release of two vessels which were seized by the JTF for their involvement in oil theft. The troop that impounded the vessels had been led by Lt. Col. Muktar Adamu, Commanding Officer, 343 Artillery Regiment of JTF. Therefore, Mr. Orupere was apprehended at the headquarters of the JTF, Yenagoa, when he came with the bribe money to the office of the outfit’s Chief of Staff, who reportedly turned down the offer.

The ships, which were named MV Premier and MV Somtrans were impounded along the Sagana waterways in Akasa, Brass Local Government Area of Bayelsa State, each of them carrying about 600,000 metric tons of stolen crude oil when they were intercepted by the JTF after an operation that lasted two days.

Media Coordinator, JTF, Lt. Col. Onyema Nwachukwu, confirmed the incident, saying the operation was in line with the determination of the outfit to rid the Niger Delta of illegal bunkering and refining of petroleum products. The impounded vessels have since been destroyed by the JTF.