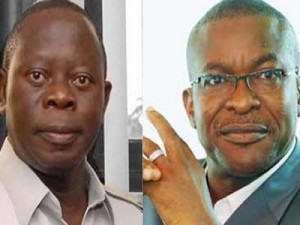 The Edo State chapter of the Peoples Democratic Party seems to be in a confused state as they have withdrawn their petition against the reelection of the governor of the state, Adams Oshiomole. The PDP had, just last week Friday, petitioned the Election Petitions Tribunal in Benin over the reelection of Oshiomhole of the Action Congress of Nigeria (ACN) at the July 14 governorship election.

However, in a statement by its chairman, Chief Dan Orbih, titled ‘Let God Be the Judge’, the PDP based its decision on the fact that the petition is likely to lead to unnecessarily dragging court cases. The statement, however, did not cease to condemn the election that brought back Oshiomole: “The results of the election are not only ridiculous but also completely at variance with rational reasoning and human expectations.”

The statement by the PDP continues: “Curiously, on election day, Oshiomhole had earlier rejected the way and manner the election was being conducted by INEC when he thought his rigging plan had failed, yet the result of the same election is now being hailed by all because it is PDP that has lost. It has now become a tradition that when the PDP loses an election, the election is free and fair.

“With the above assessment of the results, the PDP is aware of the divergent views and expressions by the public. PDP is also aware of the legal options. However, PDP has fully consulted the leadership of the party both within and outside the state.

“During these consultations, legal opinions were sought and it is the conclusion of the party that while we appreciate the effects the results declared by INEC will have on our teaming members, we are also mindful of the consequences which may run into protracted litigation.”

“Consequently, though painful, for now, PDP has decided not to file any petition before the Governorship Election Petition Tribunal in the interest of the state.”

This decision by the party, however, does not seem to go down well with the PDP’s candidate, Gen. Charles Airhiavbere (rtd.), who has promised to address another press conference on the issue