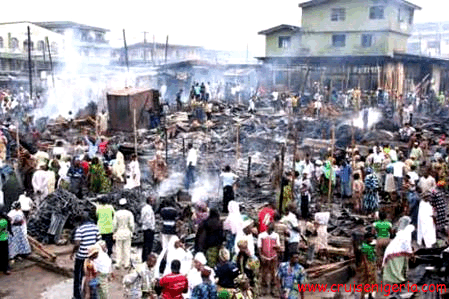 Awka – The Anambra government has ordered the closure of four major markets in the state ahead of President Goodluck Jonathan’s planned visit to the state on Aug. 30.

The markets are the Onitsha Main market in Onitsha North and other markets in Ogbaru, Onitsha South and Idemili North local government areas.

The state Commissioner for Information, Culture and Tourism, Chief Joe-Martins Uzodike, said on Tuesday in Awka that the decision was to forestall any security breach.

Uzodike also announced a restriction of vehicular movement in the areas between 8 a.m. and 4 p.m on the day of the visit.

“All markets in Onitsha North, Onitsha South, Ogbaru and Idemili North local government areas shall be closed between the hours of 8 a.m. and 4 p.m. on Thursday Aug. 30.

“This is to pave way for easy flow of traffic during the president’s visit in the areas,” the commissioner said.

He appealed to the traders and transport operators as well as residents to regard the measure as a necessary sacrifice for the betterment of the state.

According to him, the President’s visit will pave way for the creation of 5,000 jobs and change the fortune of the state in many other ways.

The President is expected to, among other projects, inaugurate the Orient Petroleum Oil, SABMiller Brewery, Orange Drugs Company, Krisoral Company and the Onitsha Inland port.

The Onitsha Bridge Head gate will also be renamed after Dim Chukwuemeka Ojukwu during the visit.

Gov. Peter Obi had said that the President would inaugurate projects executed by both the private sector and his administration during the visit. (NAN)