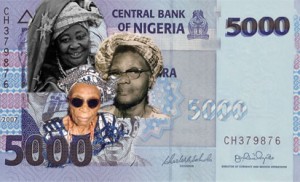 Following the several criticisms trailing the announcement of the proposed introduction of the N5000 note early next year, the Senate has instructed the Governor of Central Bank of Nigeria (CBN) Mallam Sanusi Lamido Sanusi, that the project be stopped immediately.

Chairman, Senate Committee on Banking, Insurance and other Financial Institutions, Senator Bassey Edet Otu, made the stand of the Senate clear while addressing journalists in Abuja on Monday. He said that it had become imperative for Senate to put a halt to the new CBN arrangement because a project of this kind required parliamentary approval, adding that the upper legislative chamber was never briefed prior to the announcement of the soon-to-be introduced note.

According to him, “As a committee, we should do our work. This morning there is a burning issue that is going on in our country and there is need for us, as a committee, to comment on this topical issue. I am the chairman of the Senate Committee on Banking, Currency and other financial institutions… We have also read in the papers just like you about the currency restructuring that the CBN embarked on. I believe that a project of this nature requires parliamentary approval because there are numerous and fiscal implications on the entire economy.”

The senator further pointed out that the idea is totally uncalled for, as it may send wrong signals to the world about the country, portraying us as a country in crisis. Also, the senator said that up till date, there has not been a proper assessment of the CBN currency restructuring in 2005 – which ran into billions of Naira – and its impact on Nigerian taxpayers – whether positive or negative.