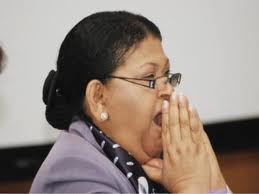 In what can only be described as a welcome development, the presidency is reported to have instructed the Secretary to the Government of the Federation, Anyim Pius Anyim to compile a list of names of holders of national honours awards who had been convicted or were facing trial for criminal offences. This is in order that the awards be stripped from such holders.
It would be recalled that some prominent Nigerian have, in the past, rejected the offer of the awards to them for the simple reason that it has been bastardized. One of such prominent Nigerians is none other than the renowned scholar, Professor Chinua Achebe.
Without having to think too far, one can come up with at least three names of recipients of the awards that have either been convinced of one felony or the other, or are under trial for a crime. Prominent names include Cicilia Ibru, the Former Oceanic Bank Boss; Chief Bode George, a (former?) PDP chieftain; and Dr Erastus Akingbola, former Intercontinental Bank boss.
The country has a lot of such people who are yet parading names with one title or the other, it is hoped that this plan by President Goodluck Jonathan will see the light of day.