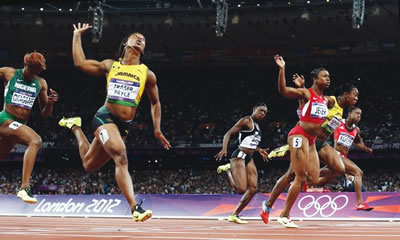 Nigeria’s medal hopeful, Blessing Okagbare, ended in last place in the final of the women’s 100m on Saturday to further dim the country’s chances of winning a medal at the ongoing London 2012 Olympic Games.

Okagbare, who qualified for the final after clocking a personal best time of 10.92secs in the semi-final, finished woefully in a time of 11.01secs as Jamaican Shelly-Ann Fraser-Pryce (10.75) emerged winner.

American Carmelita Jeter was second in 10.78secs while another Jamaican Veronica Campbell-Brown came third in 10.81secs.

Earlier in the day, Gloria Asumnu crashed out of the 100m after she came 5th in a time of 11.21secs in Heat 2 of the semi-finals.

In the women’s 400m, Regina George also performed badly in the sem-finals as she could only manage a time of 51.35secs to place 5th in Heat 2.

The sad tale continued as Omolara Omotosho came 4th in Heat 3 in a disappointing time of 51.41secs.

Another Nigerian medal hopeful in the men’s 400m, Amaechi Morton, was disqualified in the semifinal.

“It’s a sad story for Nigeria but what do you expect after our shoddy preparations for the Olympics? We planned to fail,” former Edo State Sports Commissioner, Brown Ebewele, said.