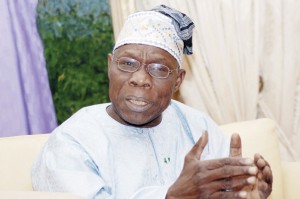 For those who thought former President Olusegun Obasanjo’s anger towards Nigerian rapper, Eidris Abdulkarem’s 2004 hit song, “Nigeria jaga jaga”, has subsided and gone with the years goofed because the dust is yet to settle on the matter.

According to him, “One of the worst problems Nigeria is facing is disbelief.

Nigerians no longer believe in themselves neither do they believe in their country. That takes me back to that song ‘jaga jaga’. How could a sane man dare to call his country jajajaja? It is the height of blasphemy.

We are grooming our youths for tomorrow’s leadership and with such persons I don’t think the country can move forward.
Concretely put, leadership connotes ability to inspire, direct, move, motivate, propel and encourage others positively to the targeted end. It is simply the ability to lead others.

An effective leader strives to avoid failure by guarding against inability to organize details, unwillingness to render humble services, fear of competition from followers, lack of imagination, selfishness, intemperance, living on rumors and gossips, favoritism and nepotism, emphasis on title and authority, excessive stress and burn out.

Conclusively, the Ota farmer buttressed that, “leadership should be a relay race and not an obstacle race.”