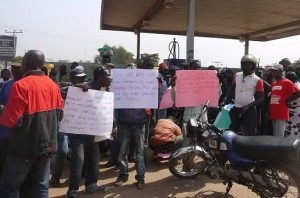 However, these motorcyclists, popularly known as Okada Riders, took their protest too far, when they besieged the residence of Alhaji Usman Bibire Ajape, the Special Adviser to the Kwara State Governor on Transport and Utilities. The protesters, who were chanting various songs to express their displeasure over the decision also made bonfires with disused tyres within the residence.

According to reports, the motorcyclists damaged the security post at the residence, broke some security lights at the gate and the fence as well as vandalised some other valuables.

Meanwhile, in an interview with the News Agency of Nigeria (NAN) shortly after the attack, the special adviser maintained that there was no going back on the order. Ajape said the measure to restrict their operation in the state capital was to ensure the safety of lives and property of innocent citizens.