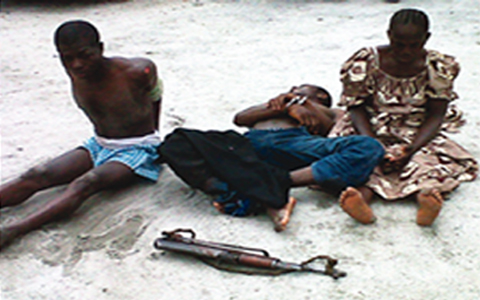 At least three persons have been arrested in connection with the Okene shootings in Kogi State, the police have claimed. Among the arrested is a 50-year old woman.

The wounded leader, named Yekini Isah, was said to have been picked up later in Edo State while receiving traditional treatment for his injury. The arrest has also been confirmed by the Police headquarters in a statement by Force deputy spokesman, Frank Mba, on Wednesday.

Mba’s statement reads: “In the ensuing battle, the gang leader identified as Yekini Isah of Obehira area of Okene sustained injury on his head. Though he initially escaped from the scene, he was trailed and arrested in a hide-out at Ibilo in Edo State, where he was receiving native treatment for his gun wounds… Two other suspects, including a female, were arrested during the operation. One AK-47 rifle with 30 rounds of live ammunition was also recovered from the criminals.”