BBA housemate Prezzo was appointed as an ambassador of the ONE campaign against hunger immediately after the end of the reality show. But contrary to reports that he’s getting $720k a year for the position and a diplomatic passport, the NGO has issued a statement clarifying that all the ambassadors that work with them do so on a voluntary basis: they do not offer financial gratification.

Prezzo was chosen after he won a competition in the BBA house to design t-shirts for the ONE campaign, which expressed ‘sustainable and smart agriculture means for Africa’s youth’. The shirts are currently being produced for ONE’s line of branded merchandise.

Prezzo it would be recalled had an on-off relationship with Nigeria’s Goldie in the BBA Star Game while it lasted. Although he didn’t win the prize money at stake, he was runner-up to eventual winner, Keagan. 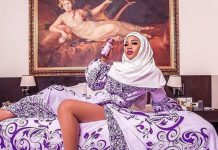 Toyin Lawani Recounts How She Was Raped At 15