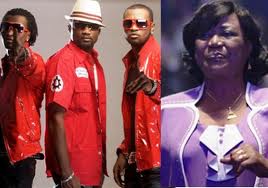 The singing duo’s mother, who passed on after a heart surgery in India, is believed to be prepared to receive a one in town burial ceremony. Talebearers disclosed that the Okoye brothers led by Jude Engees Okoye, have spent almost N50m on the burial rites for their late mother.

It was also disclosed that the brothers have spent so much in giving their mother a well-befitting and world class burial for who they refer to as the only pillar of support behind the P-Square success.

Services of M.I.C for casket provision as well as interment celebrations have also been contracted. It was also gathered that Peter and Paul have promised to spare no cost in ensuring that their late mother is well laid to rest.

While some of the preparations and items that have seen the brothers spending so much include transporting her remains back to Nigeria; building a mausoleum; ordering for a very expensive casket; engaging services of burial team and event managers as well as catering for i bbnvited guests and colleagues.