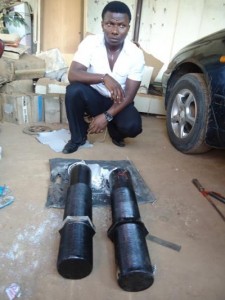 A phone accessories seller in Ikeja, one Mr. Afunaya Thaddeus Izunna, has been apprehended by the Lagos Operatives of the National Drug Law Enforcement Agency, NDLEA, over the weekend for allegedly smuggling 8.5kg of methamphetamine, worth about N27 million, carefully hidden inside metal pipes, at the Murtala Muhammed International Airport, Lagos.

Thadius, 26, was arrested with the narcotic drug during the screening of passengers on Ethiopian airline flight to New Delhi, India. Speaking on the arrest, the NDLEA Airport Commander, Mr. Hamza Umar, said the drug was discovered when anti-narcotic officials insisted in searching the metal pipes inside Izunna’s luggage.

On the development, NDLEA Chairman, Mr. Ahmadu Giade, said: “This is a spectacular seizure because the drug was carefully concealed in a way that makes detection difficult. The significance is that a warning signal has been sent to the enemy camp that one of their best tricks is not good enough. This has been my position and order to the officers that drugs should be intercepted regardless of the mode of concealment.”

Telling his own side of the story, the suspect says he is married with 2 children. In hiw words, “I am a trader. I sell phone accessories at Ikeja to take care of my wife and two children. It was a friend that gave me the metal pipes that I should take them to India for a fee. I did not know when, how and where it was packed. I was only given the bag containing the pipes… Unfortunately, when I got to the airport during screening, NDLEA officers discovered the drug and I was arrested. This is my first time of smuggling drugs. I hope my wife will understand and forgive men” Afunaya pleaded.