Home Lifestyle PHOTO: “I Have Prepared A Coffin For My Son” As Mother Allows...
Facebook
Twitter
WhatsApp 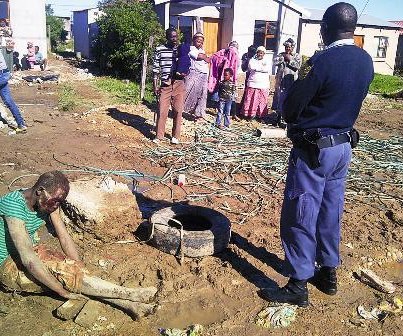 “I HAVE PREPARED A COFFIN FOR MY SON.” These are words a loving mum should never have to say.

But it’s the cry of Thembeka Mzizi (63) of KwaNoxolo in Port Elizabeth, Eastern Cape. Her son (22) was saved by cops from angry residents who wanted to necklace him on Monday morning. He is recovering in hospital from the beating he got before the cops came.

A resident told Daily Sun: “We are sick and tired of this Satan! He is a troublemaker at his home and his so-called friends terrorise people.

“Last week he broke into one of our neighbour’s house and stole two leather jackets, and we caught him wearing one of them. We have caught him several times robbing and stealing. We always beat him up but he doesn’t learn. So today we beat him and were going to burn him alive because we are tired of beating him. But when we were about to burn him, cops arrived and rescued him. When we report him to his mother, she says the same thing: even she is fed up with him.”

The thug’s mum said: “I have given up on my son. He is my lastborn and I loved him so much, but his bad behaviour killed my love for him. He has no respect for me. He insults me and calls me names, even though I work as a domestic worker for him.”