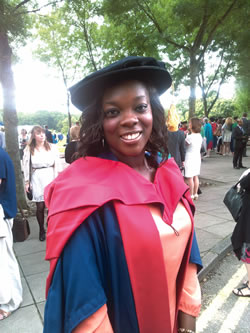 The 27-year-old Nigerian, Dr. Bahijja Raimi-Abraham, made history by becoming the first graduate of Pharmacy from the University of East Anglia, Norwich, United Kingdom, to be awarded a PhD in Pharmacy. She shares her experience with Olabisi Deji-Folutile in this online interview.

Were you born in the UK?

I was born in Lagos, Nigeria in April 1985 and left Nigeria at the age of six when my family returned to the UK – my parents had lived and studied in the UK previous to that.

After completing my primary school education in London, I attended secondary school in North Wales, Penrhos College – where my mother and her sisters also were educated; and following my GCSEs I returned to London for sixth form when I studied and passed the Advanced Level examinations (A – levels) in Physics, Chemistry, Biology and Drama.

The course was of four years in duration and led to the award of the MPharm degree. Following this, I applied to, and was accepted by Guy’s and St Thomas’s Hospital in central London to undergo my Pharmacy Pre-registration year. After passing my Pre-registration exams and attaining full status as a Pharmacist, I was invited by my alma mater, University of East Anglia, to apply and study for a Doctorate in Pharmaceutics.

How many students registered for the PhD programme?
To the best of my knowledge, there were seven of us in the School of Pharmacy at the University of East Anglia (UEA) when I started my PhD course in October 2008.

Were you also among the first set of students to register for PhD in the university?
No. UEA has been in existence for almost 50 years – it was established in 1963 and has produced PhD graduates for a number of years. The School of Pharmacy at UEA was opened to accept its first intake of Pharmacy undergraduates in 2003. I was among the first cohort of Pharmacy undergraduates to be admitted to the university that year. Approximately 90 of us were accepted for Pharmacy, and approximately 50 of us graduated with the award of MPharm (Masters Degree in Pharmacy) in 2007. I am however, the first graduate of The School of Pharmacy at UEA to be awarded a PhD.

What are your experiences in the course of your study?
Overall my experiences have been positive. Of course, studying Pharmacy and then pursuing a PhD has not been easy, both with their own challenges and different learning outcomes. I have always tried to study areas that I have had a natural interest in. For example, during my A-Level studies I thoroughly enjoyed Chemistry and on advice from my mother, I decided to study Pharmacy at university level.

At the start of the second year of my undergraduate degree I decided I wanted to pursue the highest form of education and had a meeting with the then head of school and another member of the faculty (both later became my PhD supervisors) to discuss the requirement to study a PhD. Although my experiences have been positive, there have also been some challenges. But through it all, I’ve had the support of my lecturers and my family which motivated me to achieve. My study of Pharmacy instilled discipline in me as a professional – this discipline gained as a result of becoming a Pharmacist stood me in good stead as I embarked on my PhD course.

What are some of the challenges that blacks encounter in the UK?
Challenges encountered by blacks in the UK are as wide and as varied as you can imagine – because as with all other individual experiences, one must try to refrain from generalising. For me, my life in the UK has generally been positive. However one of the major challenges is the issue of stereotyping…a problem that, I suppose, can be faced anywhere in the world. Stereotyping leads to presumptions which often take a while to deconstruct.

For example, working as a locum Pharmacist I have had experiences when patients come into the pharmacy and speak to my white health care assistant first – somewhat assuming that perhaps I’m the health care assistant while the white member of staff is the pharmacist (and overall manager of the pharmacy on a given day!). I have had to be assertive – perhaps more than I would have had to be if I wasn’t black; assertive in ensuring that I am considered and respected in the workplace.

What are your personal experiences?
As I’ve said previously, my personal experiences have generally been positive. I attended primary school in London from the age of six and then for secondary school I attended a fee-paying boarding school in North Wales where I was athlete of the year for three consecutive years. I was also a member of the school netball and swimming teams; then sixth-form college in London for my A levels before attending University of East Anglia to study Pharmacy.

I also played netball for my university. Prior to starting my PhD I worked at Guy’s and St Thomas’Hospital in London for my Pharmacy Pre-registration year. During my entire educational life I would say that I’ve been fortunate to have met some extremely supportive people. In general, I’ve learnt life is what you make it – always do something that is natural to you and that you enjoy because if applied correctly, you will excel in it.

What is the population of blacks to whites in your school?
In my PhD group I was the only black student in a group of seven white people of mixed nationality.

Are there cases of lecturers victimising students there?
To the best of my knowledge there was no serious case of victimisation from lecturers. UEA has a robust complaints/grievance procedure which all students are made aware of.

What words of encouragement do you have for young people in your shoes either at home or abroad?
I would say to young people both at home and abroad that education is indeed the key to a myriad of life-changing opportunities. It is important to get a first degree so that you always have something to fall back on.

The choice of whether or not to progress to Masters degree level or indeed to Doctorate level can be made once the first hurdle is in sight or indeed after it has been achieved. Stay positive about life in general. Good things come to those who wait – don’t try and “grow old” before your time.

What are your plans for the future? Do you intend to return to Nigeria?
I plan to pursue a career in academia. I also plan to explore and avail myself of all the opportunities that are put before me. Included in this plan is my wish to make a contribution towards the development of pharmaceutical research and practice in Nigeria.