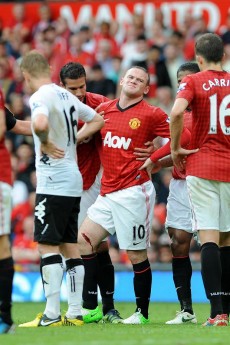 Presently in the hospital is the the Manchester United striker who is suffering the injury which came during the 3-2 win over Fulham. Rooney was taken off the Old Trafford field after the accidental clash with Hugo Rodallega.

And with his manager Alex Ferguson confirming he faces a month on the sidelines, it means he will likely miss England World Cup qualifiers against Moldova and Ukraine.

The injury came alive when Rooney was charging down a shot by the Fulham substitute, whose boot connected with the forwards’s leg.

On his right leg was a severe gash when shown on TV, and right now it is costing more than just a one match injury.

United manager Sir Alex Ferguson said: “It was a very bad one. He has gone to hospital. It looks like he will be out for four weeks.”

As well as his England commitments, the 26-year-old would miss the start of United’s Champions League campaign, while also making him a major doubt for the Red Devils’ crucial trip to Liverpool on September 23.

Ferguson added: “You have to be wary of infection and that kind of thing so he has gone to the best place and hopefully he will be OK. “Rodallega followed through and caught him — but it was an accident of course.”