The Media representatives of popular entertainer Charles Oputa popularly known as Charly Boy, released this press release in which Charly Boy explains why he put up nude photos of himself and talks about his alter ego, a woman called Linda.

Read the publication below: 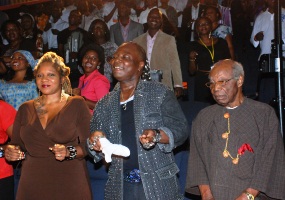 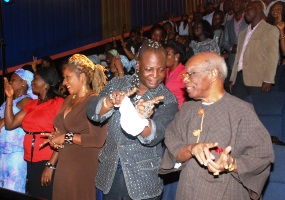 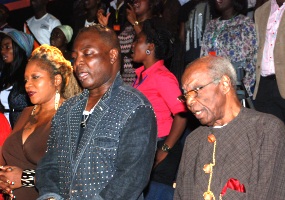 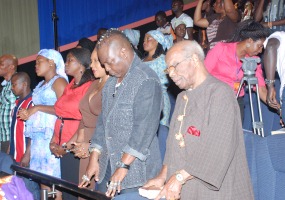 The news of Charlyboy’s invitation to one of the new generation churches in Abuja on Sunday was no doubt visited with a lot of criticisms from some people who believed that it was rather a waste of time having the acclaimed Areafada in church.
The heavy criticisms that visited his invitation to ThisRanch Sunday service was due to the latest nude picture of the social activist that has gone viral on the social media. Even with the objection, and the wave of gossips going round the internet, Pastor Gbenga Adenuga, the General overseer of ThisRanch church had insisted on bringing Charlyboy to church in order to share his deep experience with his church members.
Despite people’s objection which the Areafada had considered normal, ThisRanch church hall at the silverbird gallery was filled to capacity as different people trooped to the church in order to hear, and probably speculate about the Areafada’s preaching.
Areafada who was in church with his father, Rtd Justice Oputa, his mum, Lady D and staff of New Wave Productions and Taakra Academy  arrived  amid cheers from the congregation.
After some heavy prayers and worship songs, Charlyboy took the central stage, attending to some sensitive questions from the Pastor, Gbenga Adenuga. According to the Areafada “he was in church to share his experiences with the congregation who were mostly young people whom he believed needed to be encouraged. In his opening speech, the areafada said “ I came to pray and to share my experiences with you, most important I came to pray that God should forgive us-Nigerians, our sins for all we have done to the country politically.
Responding to the question on whether Charlyboy believes in the hands of God in the life of an individual, the enigmatic social crusader had avowed that God, during creation had given each and every one of us our various gifts, and that it was left for that individual to get connected to the good things God has provided for them. According to  the Areafada “ we are all  have been created in the image and likeness of God, and if that is the case, then God created all of us for a purpose, and that purpose can only be realized when one gets connected to it, through his own creative ingenuity.
Responding to the question on his recent nude picture, Charlyboy said, I wonder if people are creative in this part of the world at all, stating  that some of the shows put up by the brand were actually meant to express the freedom that Nigeria so desires but never came. He affirmed that no such nude picture was sent by the brand to the internet, but however advised Nigerians to begin to look at the most pressing political issues and all other positive things he had done in the country instead of wagging their tongues over some naked picture whose origin cannot be traced.  According to CB, “It is all about the mindset, and I want to say that Nigerians of this generation only see, and believe in the façade and not in the reality”
Encouraging the congregations on how he got to where he is today, Charlyboy says “ it took sheared determination, consistency, doggedness and tremendous focus to stand where I’m today” He narrated how he had spent 7 years in the village just to begin what his parents never really wanted him to do.
The shocking revelation in the church by Charlyboy was that he doesn’t smoke, drink alcohol nor womanize. He gave the difference between Charles oputa, Charlyboy and Linda, stressing that Charles Oputa is that responsible family man, with eight children and 12 grand children. Charlyboy, he said is never allowed to Mr. Charles Oputa’s house, referring to Charlyboy as a creation and a character. According to Charlyboy, there is a woman in him whose name is Linda. It is that Linda that wears make-ups.  He said that Linda directs him on how to be compassionate like women. He stated that Linda was responsible for all the humanitarian works he had done over the years. According to him, without Linda, he couldn’t have done all that.  “Linda was created to have to be compassionate like a woman” CB asserted
Speaking on the present reality in the country, Charlyboy said, despite the rot, he was confident that things will one day change for the better. He stressed that he lives in Nigeria, but will never let Nigeria to live in him.

What do you think?
AdvertisementClick Here To Join The 10,000 Naira Giveaway For 100 People!