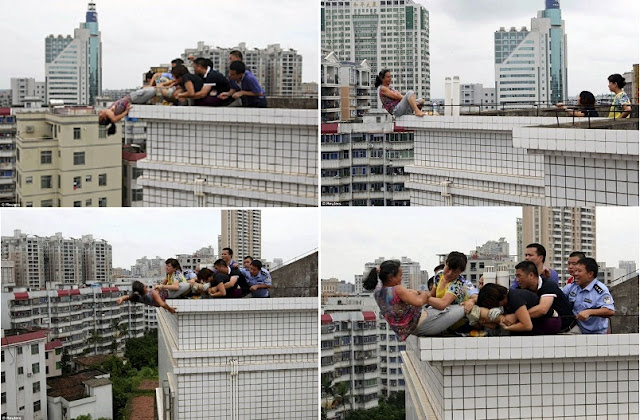 As the story goes it reads, those people in a bid to save a life the had to cling to  Sheng Fi’s legs as she threatens to throw herself off a nine-storey building.
She had smothered her four-year-old nephew just hours earlier and thrown his body from the same roof in Southern China but the saviors were oblivious of that singular fact as at the time they were thinking of saving her.
It was said that Sheng had been engaged in a very serious tussle with her sister-in-law, the young boy’s mother. This fight had caused her to kill the boy in cold blood.
She admitted to smothering him to death and throwing his body from the 100ft tall building in Zhanjiang, Guangdong province before attempting to jump after him.
Unaware, rescue workers, who had been called after Sheng was spotted on the roof, brought her daughter to talk her down after which they moved to grab her before she made the fatal leap.
Everyone got to hear the truth only after she had been brought of the ledge
‘She admits she’d thrown the boy’s body off the same roof.’, a police spokesman told local media. ‘She will still die now, but by a firing squad for murder.’