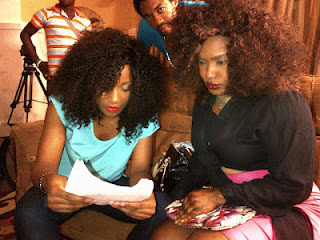 Multiple award-winning actress, Halima Abubakar is back to location to conclude the shoot of her much talked about multimillion naira movie, MISTRESSES.

This time, she took the winner of the 2011 edition of the most beautiful girl in Nigeria {MBGN}, Sylvia Nduka as well as other cast to location to feature in the movie.

Commenting on why she went back to location to continue the shoot of the movie, the Kogi state Thespian known for her taste of class and excellence said her quest for bringing out the best at all times informed her decision to go back to location.

Speaking to us at the Festac Town, Lagos location of the movie, she continues ‘I saw the movie preview and some interpretations were not convincing enough for me so I decided to work on it. Also I went back to location because of the fact that ı wanted more content and I needed to re-shoot some scenes that I lost when we first shot the movie and add more to the existing scenes. I also wanted to re-edit and put other perfect post production touches.’

Halima want to make Mistressesa world class movie, she will also be leaving for United Kingdom to shoot the London scenes and some American and British actors have been contracted to feature in the movie which will cost her millions of naira again.

The movie is expected to be premiered and released shortly after the London scenes are shot and editing concluded.

Meanwhile, Halima while re assuring her fans of her resolve to always give them the best said immediately after the release of Mistresses, she will be going back to location to shoot another movie titled ‘Away and alone’ which will be the second movie coming from the stable of Halima Abubakar owned Modehouze Films.